The Origin of The British Warships Association

The British Warships Association was conceived following a Sea Day aboard a Royal Navy Type23 Frigate, HMS Monmouth, by a small group of prominent business leaders. 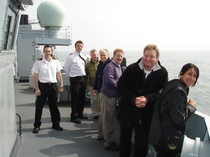 The business leaders on that frst impressive day aboard

On the 23 April 2009, the Leaders were plucked from the local Airport tarmac by Merlin Helicopter and flown out to the Ship waiting in the Bristol Channel. Once aboard they were treated to an experience of most incredible proportions, seeing first hand how the officers and crew tackled and fought the various “threats” they may encounter. It was a very privileged and remarkable insight to life on board, through the eyes of the Captain, the officers and the Ships’ company. The Leaders left that day with an the enormous admiration and respect for the professionalism of all onboard.

It was on this visit on the bridge wing of MONMOUTH that Steve Watts innovated  the term "Auxiliary Crew" for the business leaders who expressed a desire and commitment to support the ship.  Taking the word "Auxiliary" from the Latin "auxiliarus" ("assistant, ally), equiv. to "auxiliaris*"helping, aiding"), it seemed most appropriate.

On the, 22 July 2009, in Cardiff, a reciprocal event took place where a gathering of the business elite, welcomed Commodore Jamie Miller CBE RN, Monmouth’s CO, Commander Tony Long RN and his officers to an evening of conviviality, friendship and hospitality which was thoroughly enjoyed by all those present.

Amongst the many gifts bestowed up the officers was a painting by the renowned artist Neil Foggo, depicting the business leaders landing in the Merlin helicopter aboard HMS Monmouth.﻿ 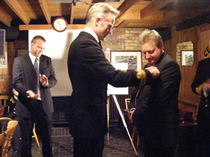 Lt. Cdr Roger Readwin made the magnificent, inspirational gesture of extending the virtual boundaries of his Wardroom to create an Onshore Auxiliary Mess for the business leaders to remain “part” of the Ship. With Business Leader Stephen J Watts installed as Aux Mess President, an enduring affiliation and unbreakable bond was formed.

It was indeed a landmark evening, of a significance yet to be realised on the night.﻿

The spirit of that evening, the benevolence, the appreciation, and the friendships were to become the founding principles of the British Warships Association.﻿

Through the innovation of Steve Watts, the concept of an Association was developed to create an “Auxiliary Crew” for each Ship to encompass all three Messes aboard with an alignment to a three level business organisation; within which any member of the public could be welcomed to support their local Warship.

With the drive of Steve Watts coupled with the committed help and support of Commodore Miller, the BWA's "Auxiliary Crew" concept was expanded to other ships in the RN Fleet.

The "Auxiliary Crews" have been a great success; broadening awareness of the  Royal Navy, increasing community support, galvanising ships other affiliations,   delivering benefits to our sailors and their ships, along with inspiring "givings" to ships Amenity Funds and making donations to Naval Charities.

The British Warships Association now serves to link all Her Majesty’s Warships with business and the communities in the Ships home region. Across the United Kingdom, the BWA On-Shore Auxiliary Messes now proudly represent their Ships, showing their support and, most importantly, showing that wherever in the world our sailors are, that our thoughts are with them and that we care!